Today, we’ll look into the new technology that Meta, formerly Facebook, just built, as well as why we think Meta may win long-term when it comes to the Metaverse. We’ll also take a closer look into what will happen in the future with the Metaverse since many of the major companies have already stepped into this booming market.

Building the supercomuter took Meta a whole 2 years of hard work, with hundreds of people working behind the scenes. The development of the supercomputer was led by Facebook’s AI and infrastructure teams. Along with the workforce behind the project was researchers from partners like Nvidia Inc, Penguin Computing Inc, and Pure Storage Inc.

Why Meta Will Win?

Next, we’ll look into why we think Meta’s supercomputer will win and how. And the answer comes down to two simple words – data collection.

Facebook alone has around 3 billion monthly active users, which is around a third of the entire population on earth. I believe that gives Meta more data than anybody on earth.

That gives Meta a head start in the whole booming market of technology. And this is the reason why we believe Meta will win. They have data of a large amount of people around the world, and they’ll know the likes and dislikes of each individual. With this information, Meta can easily hooks users into their products by taking advantage of the information they know of the user.

Moving on, the final thing to address is CleanRouter. Clean Router is the ultimate parental control to keep your kids and family safe from harms on the internet. Especially as the Metaverse becomes more and more prevalent, and as the Oculus headset was one of the most bought gifts last Christmas, it is important to manage your time as Metaverse will potentially take away a lot of your time in the future.

And this is why you’ll need Clean Router. Even if it’s to stay protected from the tiniest harms on the internet, our device will help. Clean Router ultimately provides a solution for parents to manually/automatically turn on/off the internet whenever they want. You can even block websites that you don’t want your kids to visit.

It has a lot of other helpful features, and what makes it stand out is that it blankets the entire internet in your house. So it doesn’t matter what device you or your kids use, Clean Router is capable of protecting you from all bad things online. If this is something you’re interested in, then do check out Clean Router.

A video released by the company a few months back shocked the entire world. It shows a monkey play a video game very smartly with only its brain. This is proof of advanced mankind that we’re nearing at a really fast pace!

Nueralink is one of Elon Musk’s company that he’s running along with his other companies like The Boring Company, Tesla, SpaceX, and so on. It just came out yesterday that Elon Musk’s brain implant company is moving closer to human trials.

Now, before we get into what exactly Neuralink is trying to achieve, watch the video below to see how advanced of a technology Neuralink is developing:

The Purpose of Neuralink

The goal of Neuralink is to solve neurological disorders like paralysis, color blindness, and other. From what’s evident from the video, if they can teach a monkey to use its bran to play games, then this is going to be able to help with a lot of those medical things.

Before we move any further, watch the next video of a pig with the neuralink implantation:

As evident in the video, the Neuralink chip is capable of predicting the movement of the pig before it even makes it. So information from the brain is passed as the pig thinks of moving its joints, and in most cases, the chip is able to predict the movement faster than the pig own body.

The technology that Neuralink is developing is certainly fascinating. The implants are done automatically by surgical robots. So if they have opened a job listing for a clinical trial director, then it strongly suggests that the company is getting closer to human trials!

While Neuralink is a fascinating technology that’s capable of revolutionizing the entire humankind, Clean Phone is an ultimate parental control system that can protect you and your family from all harm on the internet!

Clean Phone is a device that you can your family can use. As parents, you can manage the apps on your kid’s phone, and even monitory texting the calling.

The device also gives you the control to schedule how long kids spend on each app each app. So if you don’t want your kinds to spend half an hour on TikTok, you can configure the schedule to automatically block the app when your kids spend more than 30 minutes on it.

This is an ultimate parental control device, so if you’re worried about your kids getting into trouble on the internet, definitely check Clean Phone out.

A lot of hackers, including Chinese state-backed groups, were involved in the launching of more than 840,000 attacks initiated on companies around the world since last Friday. That, indeed, is an insane amount of hacks!

As the cyber security group Check Point reported, the attacks relating to the Log4j vulnerability spiked in the 72 hours since Friday. Additionally, the researchers were seeing as many as over 100 attacks a minute.

My roommate, who works for Amazon, told me how they had to drop everything they were doing to put all hands on deck and go all in on releasing a patch for the Log4j vulnerability.

And according to Charles Carmakal, chief technology officer at the cyber company Mandiant, the perpetrators include even the Chinese government attackers.

According to Check Point, many cases of the hacks saw the purpose of taking control over computers to mine cryptocurrency, or to become part of botnets. Botnets is a vast network of computers. They have the potential to ultimately overwhelm websites with traffic, send spam, or for other illegal purposes.

Ultimately, this is something that you definitely want to look out for when it comes to large companies. So it’s really a necessary measure to figure out how exactly you can protect yourself against it.

Speaking of protecting yourself, here’s a few words about the ultimate internet protection for you and your family. CleanRouter is a device that you can use in your home. It can protect your phone not only from cyber attacks but also from harmful things on the Internet that you do not want in your home.

CleanRouter comes with the ultimate parental controls. This allows you to control every single device in the house with only a phone. So you can have a parental control app that will control these devices, as well as set time restrictions and prohibit accessing certain websites.

Are you a pastor, a priest, a rabbi, an imam, or a religious leader of any kind? Then we have an important message for you!

We know that your place of worship is special to you and your community. It is a place of love, trust, community, and faith. You feel safe there, and you want your congregation to be safe there as well.

Most churches these days have internet access.  It’s a great resource for teaching and learning. But, as you know, many portions of the internet are predatory and unholy. Pornography has no place in your worship– for good reason! How can you utilize all the best of the internet without exposing your congregation to dangerous content?

Here at Clean Router, we want to help you protect your holy place. Our filtering technology blocks online pornography at the door. No matter how many or what kind of wi-fi capable devices come through your doors, our Clean Router will filter every single one. No one will be able to use your internet connection to access pornography.

A holy place should be a safe place. Let Clean Router protect your church and give you online peace of mind.

Your library is pinching every penny and really can’t afford to forgo the e-rate discount program through the Children’s Internet Protection Act (CIPA). On the other hand, though, you have read about the dangers of overfiltering and feel strongly about allowing your community access to all educational resources. What’s a librarian to do?

Clean Router provides user-friendly filtering and puts YOU in charge of deciding how much access your library patrons should have. Our features are completely customizable, and you can adjust the settings yourself from any computer or mobile device.

Here’s how it works:

Navigate to settings.cleanrouter.com on any computer. 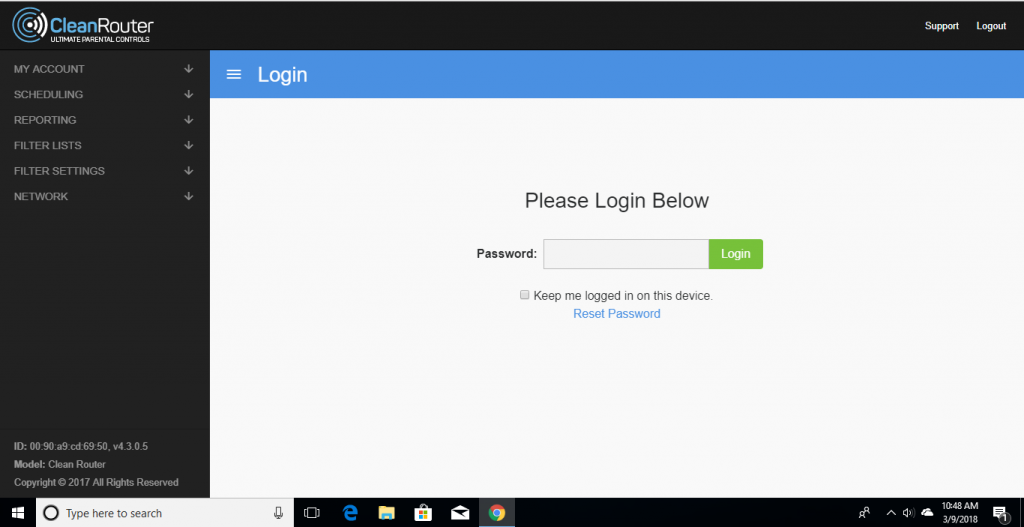 The overall filtering strength option is under Router Status. You’ll choose between strict, moderate, and relaxed. 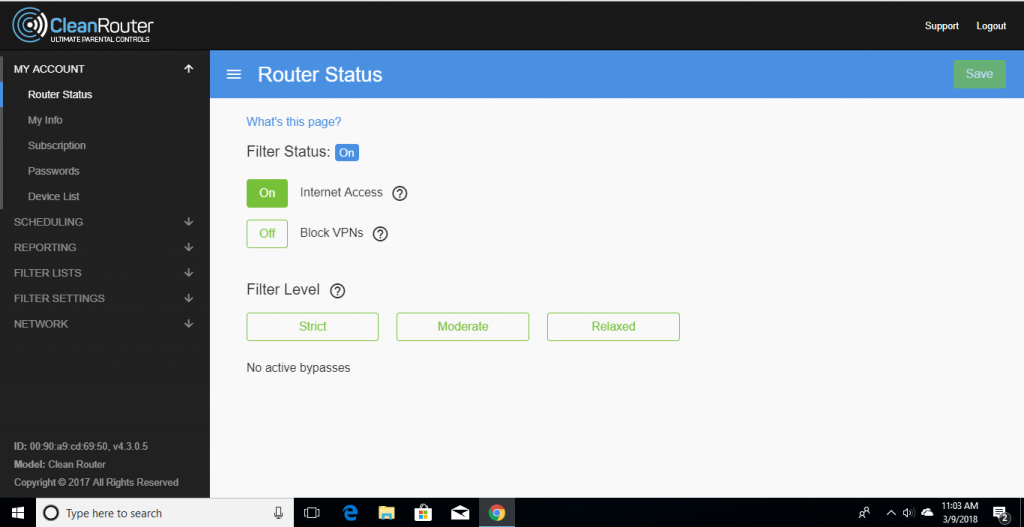 The other filtering options are under Filter Lists and Filter Status. 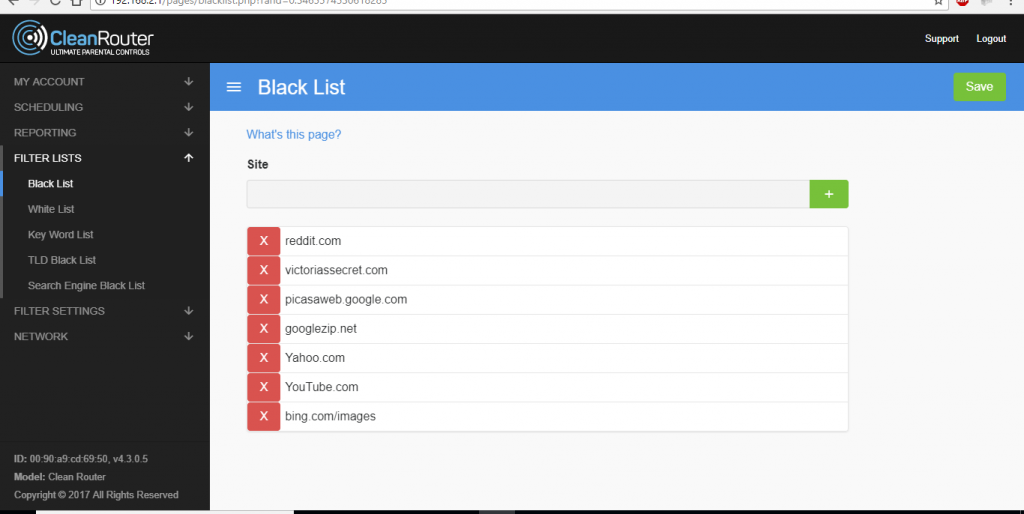 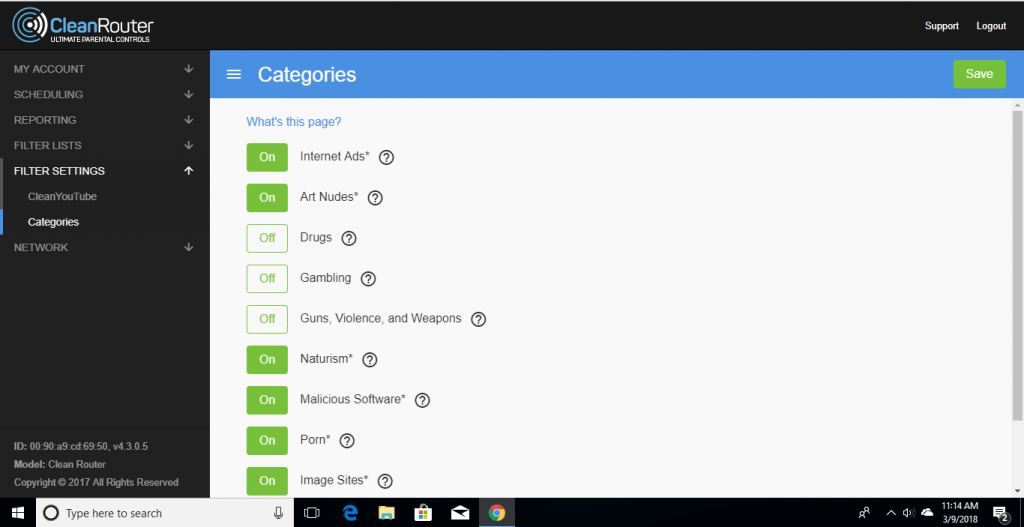 The Categories page allows you to decide whether you want to provide access to certain topics like gambling, drugs, violence, and art nudes.

To facilitate compliance with CIPA’s monitoring requirement, we’ve also included a logging feature that will record every site visited on the Clean Router network, even if users browse in incognito tabs. 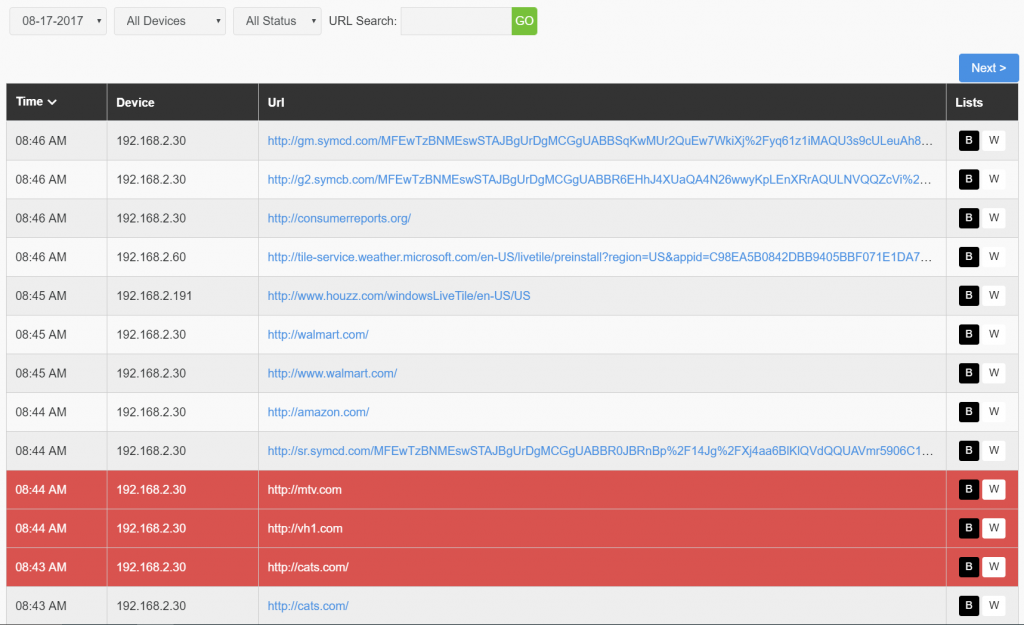 Complying with CIPA doesn’t have to be a headache or limit your community’s access to educational resources!

For families, no community resource is more valuable than the public library. Research shows having books in the home is strongly linked to kids’ academic achievement later in life, and, for many low- or middle-income families, this just isn’t possible without access to a public library. As the kids grow, the library can provide a quiet place and internet access to do homework, opportunities to connect with kids and adults in the community, and encourage them to keep reading. Particularly as an equalizer, the public library’s importance cannot be overstated.

Internet access opens the world to your community, and, for the most part, this is a wonderful thing. However, we all know the world is a complicated and sometimes downright disturbing place. Providing unrestricted internet access to the kids and youth of your community puts them at risk.

How? Research shows that kids who access violent media suffer academically, emotionally, and in their relationships. Teens who say they enjoy violent video games have a higher hostile attribution bias and are more likely to respond to others with hostility and aggression. Consumption of violent media has also been linked to decreased verbal skills, lower academic performance, and shortened memory and attention span.

Kids and teens who view pornography don’t fare any better. They also suffer academically and have decreased memory function and attention span, are more dissatisfied later in life, are more likely to perpetrate sexual harassment and develop problematic attitudes about women, struggle with substance abuse and participate in risky sexual behaviors.

Librarians, don’t let the dark side of the web drag your library down and threaten the kids of your community! Clean Router can filter every device connected to your network automatically, and you can adjust the filters and approve or block websites easily at any time!